The Kiitra alphabet is highly phonetic, with each character representing one sound or closely-related sounds. There are eight vowels, nineteen consonants, and one glottal-stop marker:

Note: The order above is for the convenience of English-speaking Terrans learning Kiitra; the actual order of the Kiitra alphabet (hirmekei) is as follows:

With the exception of ai and ei, there are no other cases of combined or “blended” vowels; in many words the glottal-stop marker is used to separate vowels from one another. This restriction is also present in other Alplai languages, and even more so with Konarai having only one vowel sound (a). Combined with the restrictions of Alplai vocal physiology (ie, rigid beaks making it difficult to reproduce more nuanced labial sounds) and the absence of certain consonants and digraphs (ch, th, w), this makes it more difficult for Alplai to pronounce many Terran words than for Terrans to pronounce Kiitra and other Alplai languages.

For most Terai (humans) first learning Kiitra, the trickiest part of pronunciation is in the vowels a and o. Also, the consonants kh and rh can be tricky for many English speakers.

Kiitra is written in continuous form; words are separated by a special punctuation mark instead of blank spaces. Paragraphs are formatted with hanging indents; this was originally adopted so that a recipient could write responsive notes in the margins. Also, Kiitra has only one letter case; proper names are designated by a special marker placed in front of the first letter.

The Alplai use a base-10 numerical system, with the nine positive numbers in groups of three, along with symbols for different mathematical operations:

[1] the “thousands” separator is used on both sides of the decimal point, to separate digits into groups of three.

Tazeimek is the proper name for the decimal mark; in the name of a particular number, the separation point between the integer and the decimal fraction is called tazei, and decimal numbers less than one simply begin with tazei.
Example A: 1.1 = \˽\ = okh’tazei’okh”
Example B: 0.3651 = ~˽\:/:/.°\ = tazei’dol’zot’ponk’okh

A fraction is expressed by linking the divdend and divisor with the archaic word for division, tii, then adding the suffix -luu. When the number is a whole with a fraction, the word sed (“with”) is placed between them; this is represented formulaically with the ˄. symbol.
Example A: one-half = \▼\. = okh’tii’dofluu; colloquial “half” = otidof
Example B: one-quarter = \▼/ = okh’tii’gotluu; colloquial “quarter” = otigot
Example C: three-fifths = \:▼/. = dol’tii’ponkluu
Example D: one and two-thirds = \˄.\.▼\: = okh sed dof’tii’doluu

The suffix -luu is added to a number to indicate the ordinal form:
“first” = okhluu
“second” = dofluu
“sixteenth” = taz’n’zotluu

Get an ebook copy of "Lamikorda" here 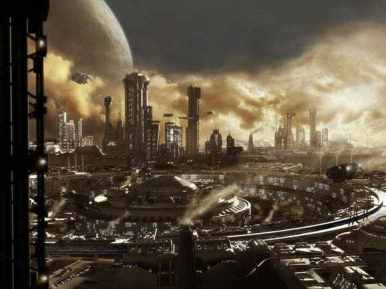